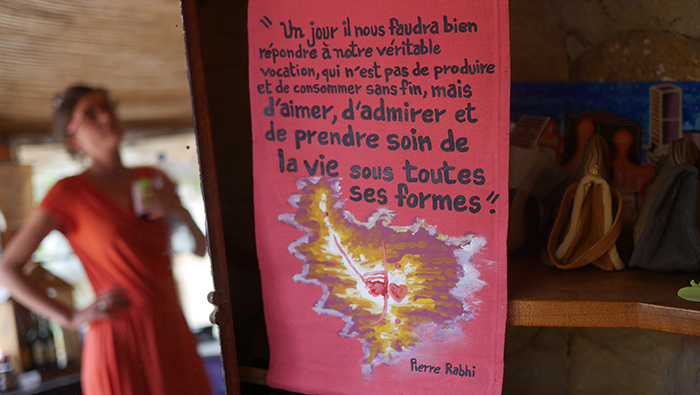 End of March, we were leaving Sandicoly with a heavy heart, continuing our Senegalese adventures. We have heard a lot from several people about Sobo Bade, touristic and cultural facility Justine also had spoted during her researches. Despite the website and the positive feedback we heard, we couldn’t imagine how much our stay in Toubab Dialaw  would be… Great? Inspiring? Rich?

From Sandicoly to Sobo Bade

We are leaving Sine Saloum for the last time at 10 am. Cooled down by our last -long- trip with a “taxi brousse” during which we experienced a miraculous road exit, we are sharing this time a “private” car with two new friends. One Italian girl living in Dakar and one American girl who is discovering Africa for the first time, delighted. The chance made us go in the same place after the Campement du Niombato where we met. The occasion for us to discover Cinecylco, an association where the Italian is working. The idea is to share cultures and knowledge through images, thanks to ingenious system which allows to make projections thanks to the exercise bike. Everyone is invited to pedal to supply the proection system. We like!

The arrival in the city of Toubab Dialaw, about 40 kilometers away from Dakar, was kind of disturbing. After our almost two months of “bush” in sometimes wild landscapes, often enchanting, always deep in nature, the hills of the city being intensivly covered with concrete, were pretty shocking. Especially when we know how much concrete, legacy of colonization, insistently perpetuated by western multinationals with the support of local governments, is an economic, environmental and social heresy, regarding alternatives already evidence otherwise.

Sobo : voodoo god (Loa) of thunderstorm ; Bade : god of lightning, symbolizing sound and light. Are you lost? Disconcerted? You haven’t seen anything yet!

The first contact with the tourist and cultural spot, necessarly visual, contrasts with the surroundings. Everything here is built with natural and/or reused materials. We could say it is Gaudi… But different. Warmer… 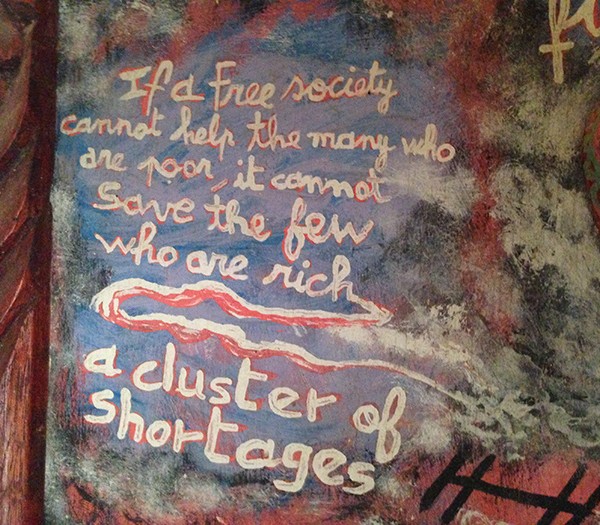 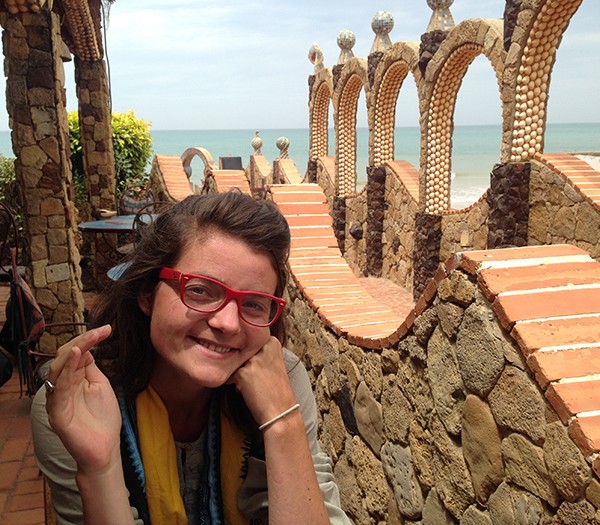 After a restful meal, we saw the founder, Gerard Chenet, 89 years old, enjoying the sea view. We knew already that he was haitian… “Kijouan ou yé ?” (How are you, in creole) could I not help asking, in this language that I love. Smiling, Gerard answered in this same language, asking where we were from. But he already knows who we are, because Justine already exchanged some emails with him.

After th first hour of conversation, during which we explained deeper our approach, but mostly carefully listened to all the experience the man were kind enough to share with us, we decided to go in his office. Benevolent, I asked him if I could help him to get up and walk… his astonished eyes, and then his smile, where enough for me to realize my clumsiness. 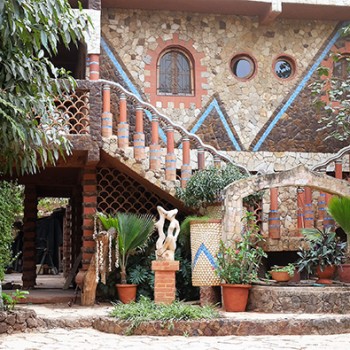 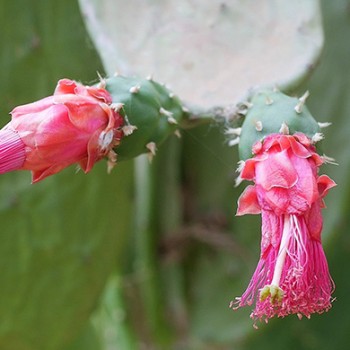 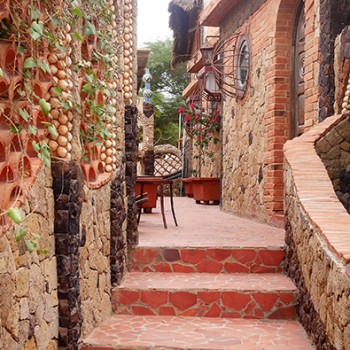 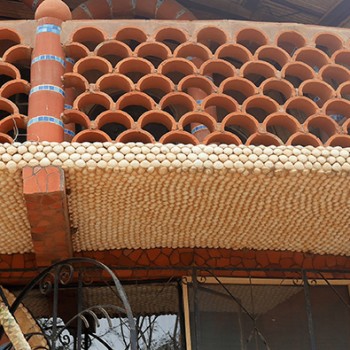 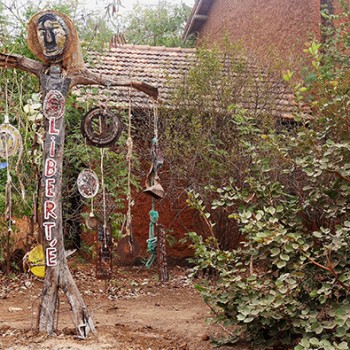 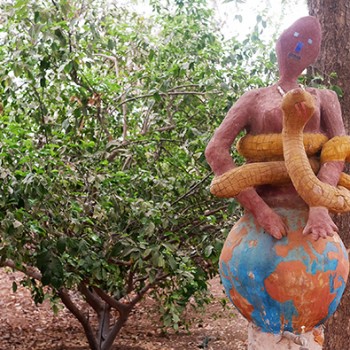 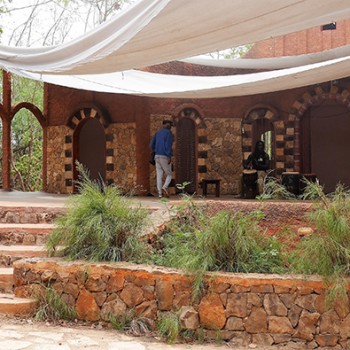 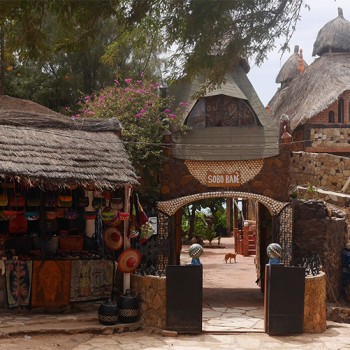 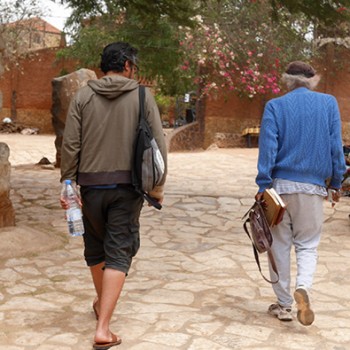 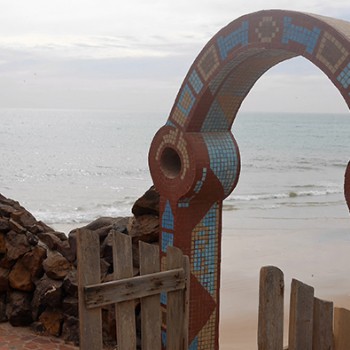 A great man, a great work

There are some people it is hard to precisely describe, as what they convey is as much mystical or spiritual, than reason: as they command admiration, whether through their work, their aura (or energy), or simply the wisdom every sentence they pronounce is full of. Gerard Chenet, the writer, the sculptor, the builder, the stage director… is definitly one of them. Et the team that is around him seems to be in the same dynamic of better-being and better-living, in a certain humility,  instilled by the founder.

We spent 2 days in Sobo Bade to discover as much as possible its 48 years of history, experiments, from construction to energy or water management or culture and art…

Finally, around 40 rooms, in several experimental buildings located in three different places, 2 open air theaters, a natural swimming pool with phytopurification, a series of workshops and exhibition spaces  dedicated to ironwork, Batik, music, dansing, making clay bricks, painting, and more than a dozen resident artists, and other dozens evolving now in Europe or elsewhere on earth… and so on!

Sobo Bade is an (eco)touristic and cultural space whose influences go beyond the borders of Senegal. An example in terms of reasoned, integrated and responsible tourism development. A laboratory not only for a better tourism but also and mostly for better-living and better-being; to magnify culture as a whole, vector of identity, exchange and understanding between people. 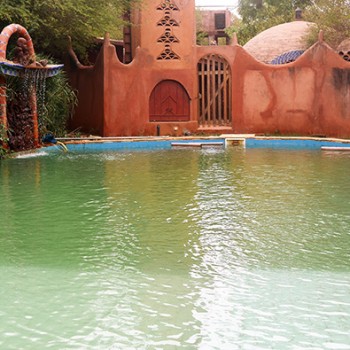 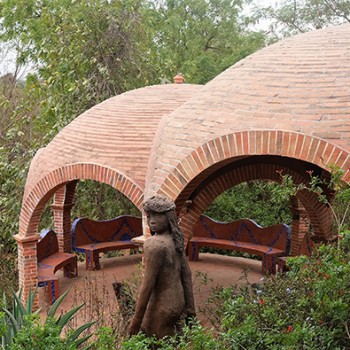 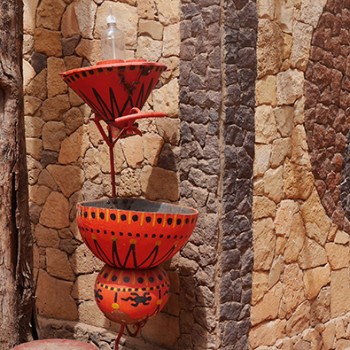 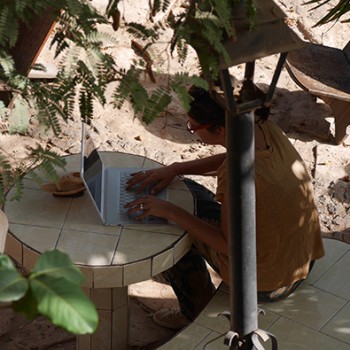 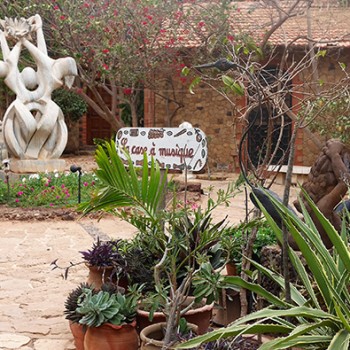 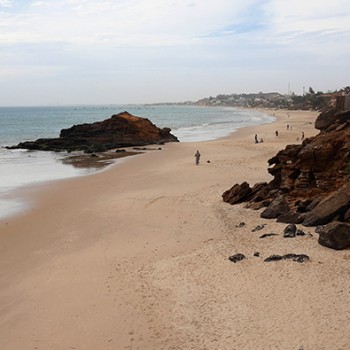 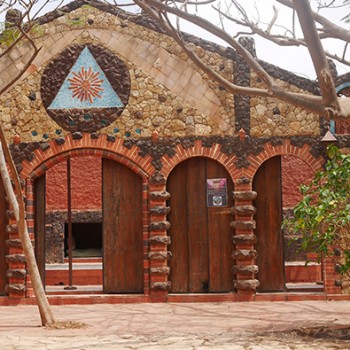 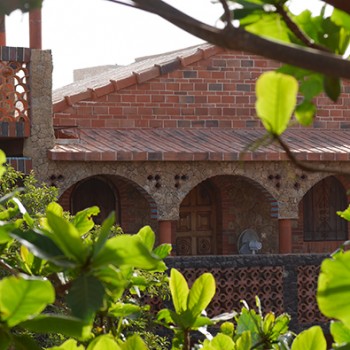 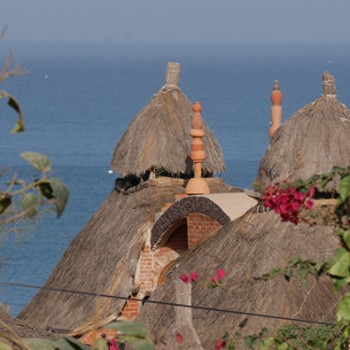 As you might already know, the seed of a “HopLab” (or Hopineo Laboratory) is quietly germing in Justine and I’s minds. The idea of gathering in one (eco)place as many good practices as possible that we, are other HopTripers, discovered during our trips; the idea of giving visibility to those good practices, to transmit, to welcome all kind of alternative experiment in terms of ecoconstruction, energy independance, agriculture, homemade and autoconstruction, local development… well, everything around eco-logical transition.

Useless to say that the numerous hours spent around the crafts-wo-men of Sobo Bade (and mostly Gerard), going from surprises to discoveries, form learnings to meditation, conviced us even more in our deep will. And most of all, the advice and experience of Gerard Chenet, in addition of nurishing us, showed us that… it is possible!

It is possible to have a dream, get hooked to it and strive for it, untiringly. It is possible to start with -almost- nothing except will and vision. It is possible to mix, to push, such a worm which kneaded the earth it is drilling, as many ideas as necessary, with no limits other than imagination, consistency and integrity of the approach aigainst oneself.

“Little by little“. It is full of humility, the most determined advice we got during our rich stay. The second is: “Everyone should exercise at least an art regularly. It is essential to create, keep brains sharp. This is part of the respiratory rhythm of life.“

Let’s conclude in referring to the practice of concordance of rhythm, universal rhythmic system … in a word rhythmanalysis, Gérard Chenet is an avid practitioner and, in contrast to psychoanalysis, uses the clear conscious clairvoyance rather than the depths of being unconscious. If the case came to your attention, we let you satisfy your curiosity by digging yourself, with two first entries: Wikipedia and an other website. 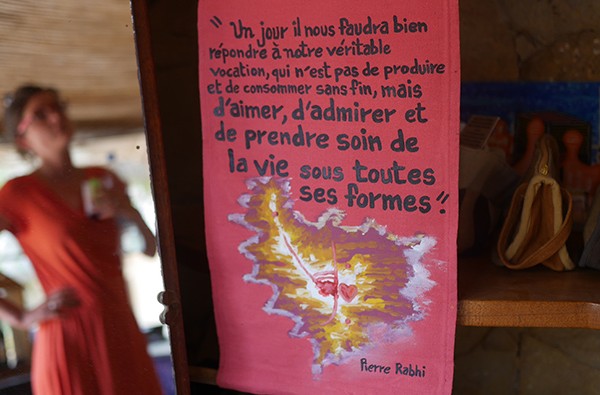 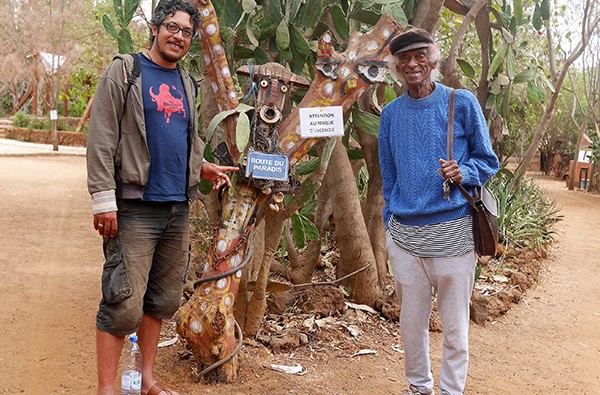 If you are passing through Senegal, don’t commit the mistake not to stop by Sobo Bade. 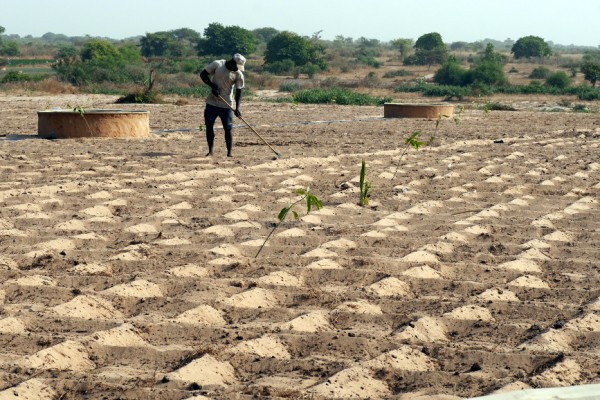 Our day in the fields 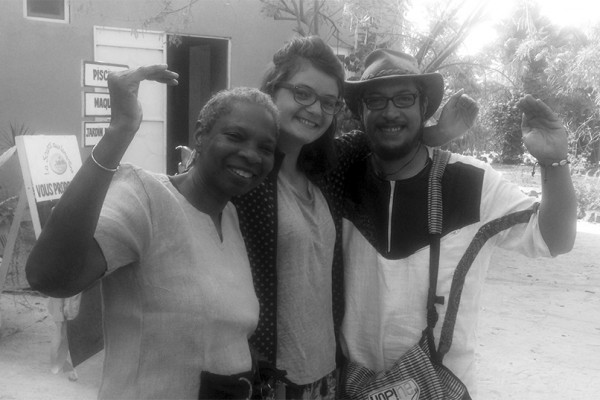 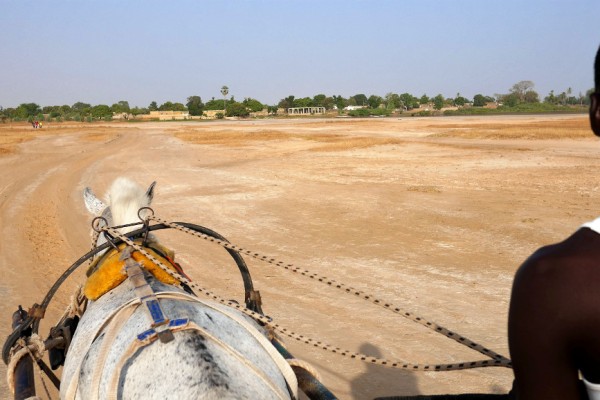