This year, I tried a vegan christmas meal. Well, to confess dear reader, it wasn’t totally amazing. I would have loved that everyone says “wow, it is actually real that we can do without meat, and it is even better!”. But no. It wasn’t quite the reaction of my family and I. I must have missed something somewhere.

However, I promiss dear reader, that I’ve tried my best. I spent most of the day shoping, weighing, mixing, cooking, molding, unmolding, adjusting, etc ; and I also put a lot of love and will in it.

But the result is kind of the same as the roast from last night. Very dense.

As an aperitif, we tested the famous Faux Gras that I’ve heard so much about. Vegan or not, I had already decided to quit foie gras this year, mostly for ethical reasons.

About the Faux Gras, I had heard good things, and not so good things. But a friend on Facebook told me it was really good, so I wanted to try it out. And well… It is not uninteresting. Still, I was a little disappointed because it tasted cinnamon and I do not like it, but you acutally get used to it. Next time, I will try to make my own, we’ll see what happens.

As a main dish, I had made a Christmas roast with its hunter (the didn’t hunt) gravy, following the recipe I found on the blog of Antigone XXI and that looked so good. As I’m a newbie in the vegan world, there are a lot of ingredients I don’t know (or not well), and that I found pretty fun; such as the chesnut flakes, brown miso, malted yeast (yes, I know, no need to be vegan to know those ingredients…).

Much as I loved the sauce, I will do it again for sure, as for the roast, I had not been super excited. Maybe there were too much coral lentils. Because it was a bit stodgy. And, I put nearly an hour longer to cook than what was recommended but it was still not really super cooked. Maybe today, sauteed, it will be better? I do not doubt it !

To go with, I made some roasted veggies from this same recipe. Once again: failed. It was bitter and not melty enough for me. Usually, I first plunge the sprouts in the water. Maybe I should have?

For the main dish, I would say 6,5/10, because I really loooved the sauce and fr the rest, I felt a nice potential (even if my brother nearly touched his plate and had half of a baguette with camembert before dessert). 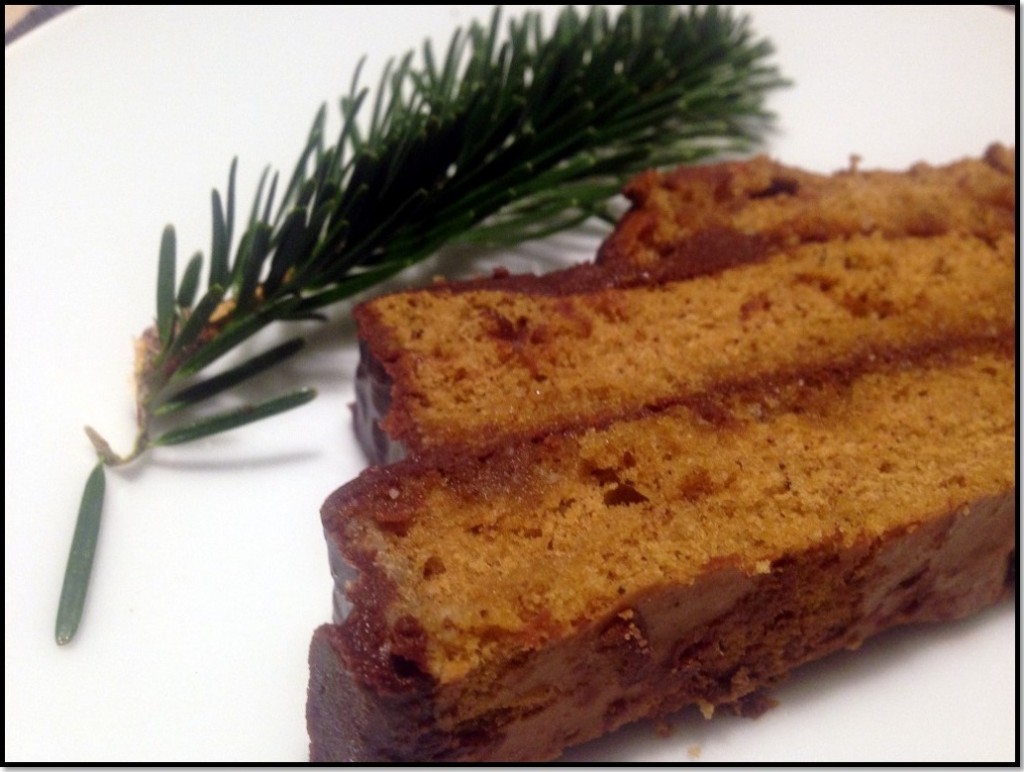 Finally, for dessert, I saw this recipe on ConsoGlobe for a vegan yule log. Last year, I made a super good log with a looot of cream, butter and eggs. Is it possible to make one as good as this one but vegan? Well, you know what, I think so! I adapted the recipe a little putting baking soda and lemon juice instead of chemical raising powder, and I used  little bit less than recommended of pistachio puree, but it was really really good! The only things is that my ganache was too thick with bubbles in it. So I could roll the log. So it wasn’t really a log. But still pretty don’t you think?

Voila, this was the story of my first vegan experience, I probably made a lot of mistakes, and this is why it was less good than it was suppose to be, but I will persevere.

And you, did you try those recipes? Or willing to try them? You tell me you story?

Anyway, I will sure try other vegan recipes!